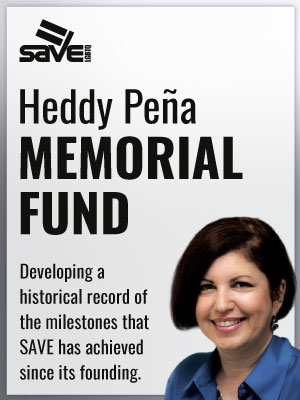 The Heddy Peña Memorial Fund’s purpose is to develop a historical record of the milestones that SAVE has achieved since its founding in 1993. This will include a factually based recordation of the individuals involved as volunteers, members of the board of directors, and staff who have all significantly contributed as leaders in helping to enact landmark legislation to advance equality for the lesbian, gay, bisexual, transgender, and queer community in South Florida. The document will ensure that people involved are not forgotten and that the significance of their work is shared with future generations. The historical record will be posted on the SAVE website and will also serve as the basis for updating an entry on Wikipedia.

This project was initiated in June 2020 when former Executive Director Heddy Peña died after battling ovarian cancer, her husband Jesse Brooks commented that many people living in South Florida benefited from her work though so few people know who she is. Heddy’s work to ensure that sexual orientation was added to Miami-Dade County Human Right’s Ordinance was significant.

If you think this page contains objectionable content, please inform the system administrator.